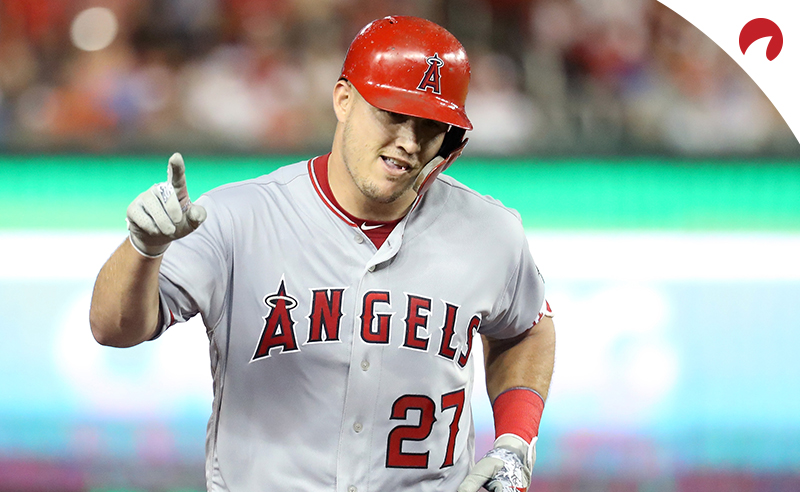 The home run in baseball may be the most exciting piece of action in America’s favorite pastime and with a shortened 60-game MLB season on the horizon, bettors need to start doing their homework on which player will lead the big leagues in homers for the 2020 regular season.

According to the best baseball betting sites, reigning American League MVP Mike Trout of the Los Angeles Angels is the betting favorite and is followed on the oddsboard by a young slugger from Queens.

Trout is listed at +900 to lead MLB in home runs as per Bovada after slugging 45 dingers last year in 134 games. Following right behind Trout is New York Mets 1B Pete Alonso (+1000), who in 2019 set the record for most home runs in a season by a rookie.

With a shortened season, bettors may not see home run numbers climb into the 40s for 2020, but a condensed schedule with most of it being played during the summer could still be a positive for sluggers trying to get their timing down.

Check out our handy guides on how to bet on baseball or see the most recent MLB futures odds to get up to speed.

For now, here are the full betting odds for which player will lead MLB in home runs in 2020:

Alonso Primed For Another Power Surge

Mike Trout has all the tools to win this prop but the player who should be taken seriously by bettors is Pete Alonso of the New York Mets. Alonso led the majors in home runs last year with his hard contact rate (fifth in MLB) and he was also fourth in MLB in home runs per at-bat.

Alonso has all the makings of a star and the fact that he finished the season so strong (11 home runs in September) makes banking on him a safer pick in case he has a slow start. The odds aren’t the best at +1000 with all of the other options on the board but until we see Alonso have an injury or show signs of slowing down, you have to go with his solid, albeit small, track record.

Take A Swing On These Sluggers

Other than Alonso, the two players who may be worth a sprinkle are Giancarlo Stanton of the New York Yankees at +2200 and JD Martinez of the Boston Red Sox at +2500. That’s right. Two AL East sluggers.

Stanton might be the biggest wild card of the group but this is mainly about opportunity and talent. The former richest player in baseball (now second) didn’t even really get on the field in 2019 as his second season in pinstripes was marred by injuries and he was limited to only 18 games.

His first year in New York should almost be considered a wash because while he hit 38 homers, he was adjusting to a new league and new pitchers.

It feels like a lifetime ago when he swatted 59 with the Marlins in arguably one of the least hitter-friendly ballparks in MLB. With such a short porch in right field at Yankee Stadium and the protection up and down the lineup, Stanton could be in line for a huge bounce-back campaign to lead the Yankees to another World Series title.

Then there’s JD Martinez, who finished second in home runs in MLB in 2018 behind the Athletics’ Khris Davis and has been arguably the best Red Sox hitter since moving to Boston.

Martinez has hit 80 home runs over the last two seasons and although Mookie Betts was traded to the Dodgers, it’s not like the Red Sox were a two-player team because they’ve got young studs up and down the batting order.

Martinez is a long shot to win this award but as he demonstrated during his stints with the Tigers and Diamondbacks prior to signing with the Red Sox, the man just knows how to crush the ball. Call your shot like Babe Ruth and take JD at +3300.

The above chart features the odds for the top sluggers in Major League Baseball and which ones will lead MLB in home runs by the conclusion of the season. At your sportsbook of choice, the betting lines would look something like this:

This means that Trout is the favorite since he has the lowest odds and the highest chance of winning the prop, according to oddsmakers. If you were to bet $100 on Trout and he won, you would get a payout of $1,000 – your original $100 is returned along with your winnings of $900.

Our Odds Calculator will show you how much you’d win based on the odds and amount bet.

A futures bet is a wager made on events or milestones that will happen in time. The MLB HR leader bet is a form of futures betting because you are making a pick based on an outcome determined at the end of the MLB regular season. It’s best to lock in your bets sooner rather than later so you can take advantage of better odds. The closer it gets to the end of the season, the more the odds will change.