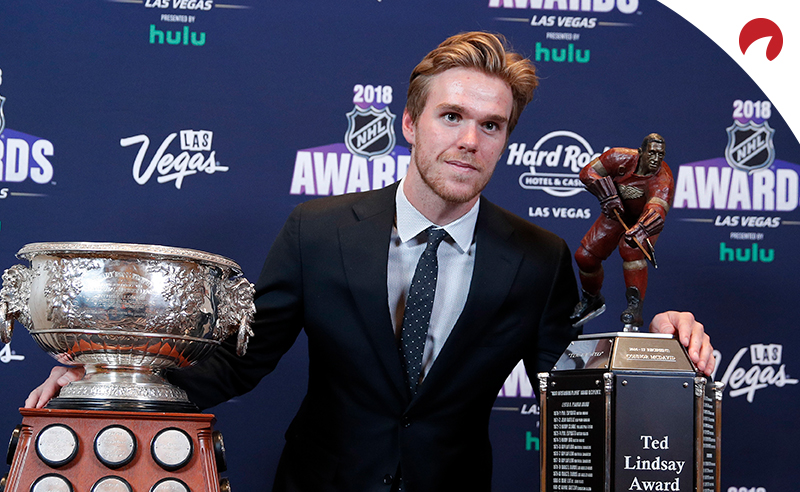 When it comes to the 2021 NHL season, there are certainly many storylines with the four-division format, including an all-Canadian division. The shortened schedule and exclusive intra-divisional play makes the Art Ross Trophy race a little more interesting this year.

The Art Ross is awarded annually to the player who leads the league in points at the end of the regular season. Online sportsbook Bovada has listed two-time winner Connor McDavid as the -120 favorite to earn the award. Behind him is teammate Leon Draisaitl (+450), then it’s Nathan MacKinnon (+1400), Mitch Marner (+1600) and Auston Matthews (+1800) rounding out the top five choices in Art Ross Trophy odds.

For more hockey betting content, head over to our NHL page. Take a look at the book’s full list of odds:

Who are the Art Ross Trophy Betting Favorites?

Odds as of February 10 at Bovada

Can Anyone Catch McDavid and Draisaitl?

Last year, Draisaitl won the Art Ross Trophy with 110 points and his teammate McDavid was second with 97. The two have comprised the most dynamic duo in the NHL over the last few campaigns.

Through the first month, McDavid leads the league in points with 27 and Draisaitl is in hot pursuit with 25. The latter is two weeks removed from a six-assist performance against the Ottawa Senators; McDavid countered with a goal and four helpers in the same contest.

McDavid and Draisaitl will have many more games against the Senators during the season, but they’ve also shown that it doesn’t matter what team they play, they will find ways to get on the scoresheet. McDavid is the -120 favorite to win the award while Draisaitl is +450.

Mitch Marner is currently third in the NHL scoring parade behind McDavid and Draisaitl with 21 points in 14 games while playing on a line with Auston Matthews. He’s on pace for 84 points in a shortened 56-game season.

Marner plays on both the power play and penalty kill and is among the top forwards on the Toronto Maple Leafs in average ice time. This gives him ample opportunities to increase his point total throughout the season. Marner has impressive vision on the ice, evident in the 15 assists he has amassed already.

Marner currently has +1600 odds to win the Art Ross Trophy, which means it’s the perfect time to place a bet on him. If he can stay healthy, he will be among the top point producers in the league by season’s end.