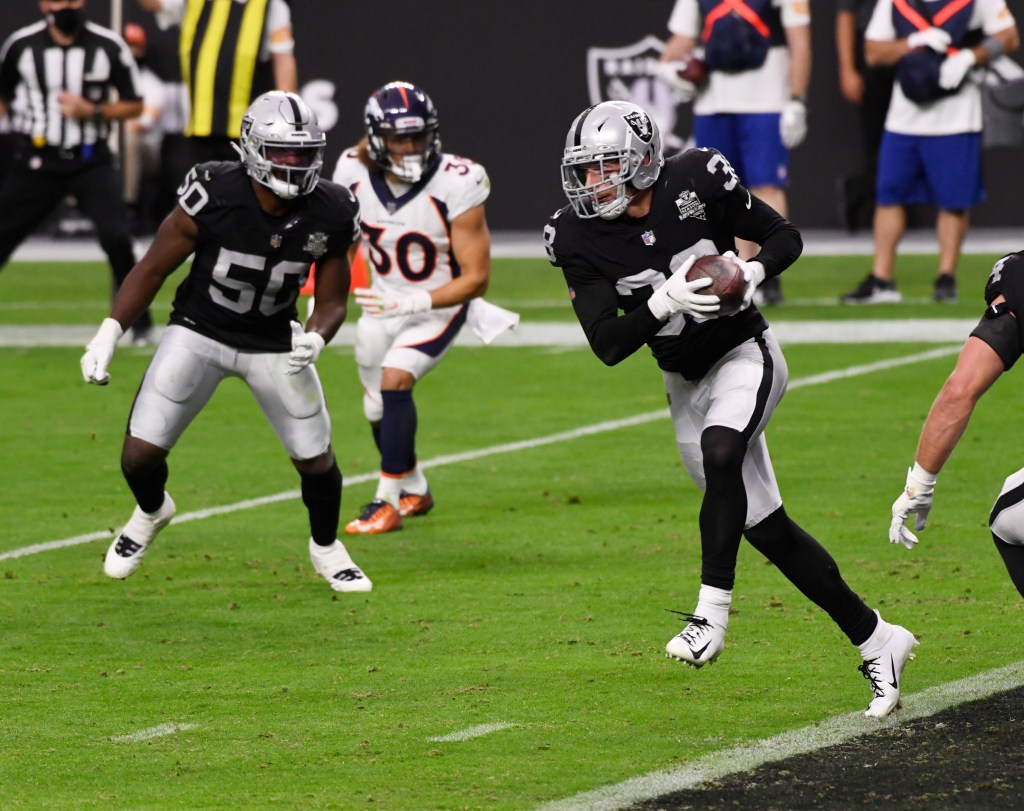 Up: Ramming speed. Called up from the practice squad last week, former Colorado State star Josh Watson delivered a thunderous hit on special teams that left Raiders kick returner Jalen Richard writhing on the Allegiant Stadium turf. A bizarre celebratory dance followed. High marks for the hit. We’ll get back to you on that dance.

Down: Math skills. The Broncos defense failed to count to 11 not once, but twice in the second half. The first time, Malik Reed ran on the field late to give the Broncos 10 — a formation that ended with Josh Jacobs scoring from five yards out. On the second, Denver lined up 12 on second-and-9 at its 10, forcing coach Vic Fangio to burn a timeout.

Up: Bryce Callahan vs. Everyone. The Raiders decided to try the Broncos cornerback in single coverage several times in the first half. No dice. The one time Callahan’s coverage broke down in second half, Darren Waller dropped what would’ve been a long gain. Sometimes, it’s better to be lucky than good.

Down: Feed Phillip. For the second week in a row, Phillip Lindsay barely got his hands on the football. A week ago, it was eight rushes for 23 yards. On Sunday in Vegas, one of the Broncos’ most explosive players had just four touches through three quarters … and didn’t get another the rest of the game. Unacceptable.

Up: Man in the middle. Defensive lineman Sylvester Williams’ name won’t show up a whole bunch in Sunday’s box score, but the prodigal first-round pick’s made several positive plays for the defense — not the least of which was a drawn holding flag on fourth-and-short that stalled a Raiders drive into Denver territory.

Down: When right is wrong. It was a rough day running off the right side of the Broncos offensive line, where backup right tackle Calvin Anderson struggled to get a push and got blown up on more than one occasion. Get well soon, Demar Dotson. Your presence is missed.

Down: Holds barred. Say what you will about Drew Lock’s goal-line interception (we will, it was bad), the holding call on tight end Noah Fant on the play that preceded it was unforgivable, as it negated a sure-fire QB keeper touchdown run. Fant says he wants to be a complete tight end. It starts right there, Noah.

Down: Offside issues. A pair of third-down stops in the first half by the Broncos defense was taken away because of offside flags. On the first, Malik Reed lined up in the neutral zone (a big no-no), while Demarcus Walker was coaxed into jumping early by Derek Carr’s hard count — keeping alive a drive that ended with a Raiders field goal.

Up: Always the gunslinger. Lock’s willingness to let it rip can be frustrating (see the four interceptions, including one into triple coverage downfield) and fun (back-to-back 20-plus-yard throws to Jerry Jeudy and Tim Patrick on a drive that resulted in a field goal). At the very least, after the days of Case Keenum and Joe Flacco, it’s entertaining.

Down: Broncos screen plays. Nine games in, and we’re still waiting to see a successful screen play out of Pat Shurmur. The Broncos offensive coordinator dialed one up for Fant in the first quarter, but the tight end picked the wrong lane, opting against open field to the outside and cutting back to the middle for no gain.

Up: Jerry Jeudy vs. Henry Ruggs. Few things were more on brand during the 2020 NFL draft than the Raiders drafting the fastest guy at the combine (Ruggs), instead of the smooth route runner with supreme pas-catching skills (Jeudy). The final tally in the former Alabama teammates’ first meeting: Jeudy four catches-68 yards, Ruggs 3-31.

Down: Especially bad. Note to Diontae Spencer: You’re supposed to run forward on kickoff returns, not reverse field twice before you reach the 10. Note to Davontae Harris: You’re supposed to block for your punt returner, not tackle him. Note to Tom McMahon: Might be time to start updating that resume.

Up: Allegiant Stadium. The Raiders got this place right. Terrific natural light through the roof. A view of ‘The Strip’ through windows of one end zone. It’s the opposite of the Oakland Coliseum.

Down: Slot machines. The pandemic hasn’t stopped the one-armed bandits from forcing tourists to make a donation to the Las Vegas economy. Start with $20 and the machine teases you with a few wins up to $25 before dropping the (losing) hammer.

Up: Playing surface. The Raiders play inside at Allegiant Stadium but owner Mark Davis was adamant he wanted a natural grass field. What the owner wants, the owner gets. Well done, Mark.

Down: No fans. In August, Davis said if his 8,000 personal seat license holders in the first eight rows of the stadium couldn’t attend, no fan would. Bad move. Just give the PSL folks new seats and adjust the costs.