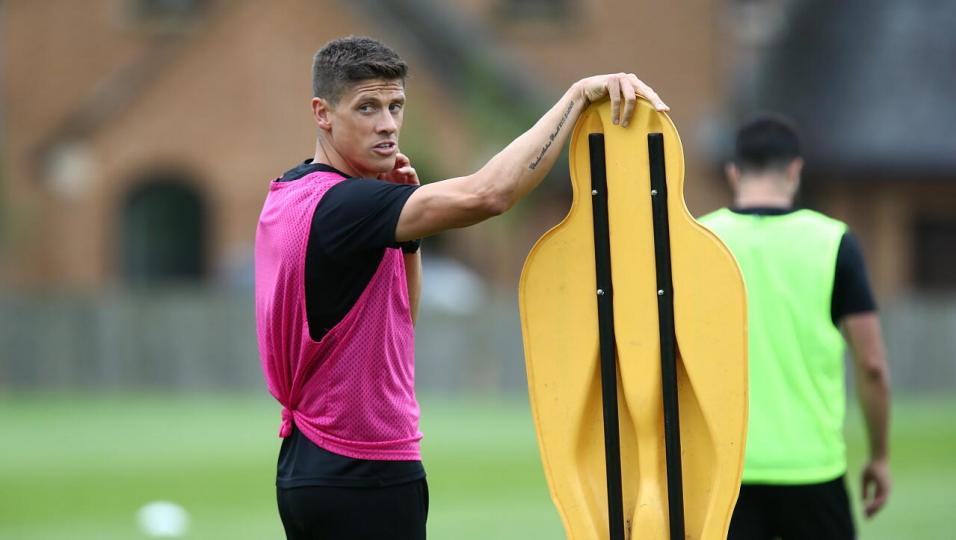 When sacking a great club servant, Ross Embleton, who had stepped in as manager at various occasions and times of crisis, chairman Nigel Travis said Leyton Orient could still reach the play-offs.

That had begun to look a very ambitious target at the end of February when the club hadn’t won in seven games and had scored just twice. Beating Grimsby, under “natural leader” Jobi McAnuff in his first match, might have given the O’s false hope. The Mariners are in the bottom two, after all. A thumping 4-0 defeat at Exeter on Saturday was chastening.

The Grecians, said winger McAnuff, were way better all over the pitch and had greater desire. And confidence, I should imagine. The new manager can’t change the personnel now, just the mood. Tristan Abrahams, who started for Newport as they were flying high in the league and cup this season, must wonder how it came to this – on loan at a team lacking confidence and results. Top scorer Danny Johnson (14 goals) hasn’t netted in six matches as he works his way back from injury.

The play-offs for Orient will look an even more distant hope if they lose to Stevenage because Alex Revell‘s men would rise above them. Given that the visitors have three wins and three draws in their past six games, conceding just one goal, victory is a distinct possibility. Opta point out that Orient are winless in four at home, last going longer (seven) in January 2020.

The game might not be pretty, because Stevenage have only scored six, a surprise 3-0 win over Forest Green breaking a tight game mould.

Revell praised his leaders in defence after the 1-0 win that dented Harrogate’s recent momentum. It helps when you can throw in the experience of Luke Prosser as needed in a backline that already includes seasoned professionals Ben Coker and Scott Cuthbert. Relative youngster Luther Wildin has more than held his own these past two seasons.

At times, Revell has opted for five at the back and one striker. Opta say they have never had clean sheets in four consecutive away games in the Football League, so could they create history?

They can afford to be less cautious, after shinning up the ladder to mid-table security and now that League Two safety looks secure. Sticking with their manager – for whatever reason – when others all around (except Southend) were firing theirs has paid dividends. If the defence can hold up again, Elliott List, from midfield, or Danny Newton, up front, will be only too eager to add to their goals tally. The visitors are more than value at their win price.

Anxiety comes in many forms. Alfie May relieved his, about not scoring for seven games, by starting the goals against Port Vale in Cheltenham’s 3-2 win over Port Vale, who came back late in the game.

May might be the focal point of the Robins’ attack. He received many compliments when they faced Manchester City in the FA Cup. However, he has only scored six goals this season which doesn’t put him among the top 20 League Two scorers – or even make him top scorer at his own club.

That title belongs to Andy Williams (7). Boss Michael Duff says having Aston Villa loanee Indy Vassilev in training has really boosted May, who shouldn’t be overly worried about not scoring enough when the team is winning.

Cheltenham are now top after one defeat in 13 and six wins from the last seven games. Sam Smith, on loan from Reading, and Callum Wright, a midfielder on loan from Leicester, have each scored twice in their loan spells in that time. Rivals doing well might be feeding the anxiety.

Mansfield manager Nigel Clough has more to worry about. The Stags haven’t scored in four of their past five games and have had a player sent off in each of the past two.

Jordan Bowery netted their only goal in that run, as they beat Morecambe which at least lifted their Field Mill return to three wins. They lost the previous two at home, though, one of them having led 2-0 against Bolton, via Ollie Clarke and Jamie Reid. Clough blamed right-back Kellan Gordon for two “inexcusable errors” that led to the two goal defeat at Barrow, who took only their second win – and points – in seven games. Hanging individuals out to dry is no way to instil confidence.

Mansfield have conceded 10 in six games, and it’s unlikely in their current mood that a bank of six home draws could hold off Cheltenham, who have nine wins and a +9 goal difference away from home, options, confidence and six clean sheets in eight games.

Although Opta point out that Mansfield have won three of their past five home league games – more than they won in their previous 23 – they add an incentive for Cheltenham. If the Robins could gain a 10th away win of the season (after 16 matches) it would be the quickest they had done so since 2001-02 (19 matches).

A controversial mid-season pitch switch to Cardiff City leaves Newport, as boss Michael Flynn says, with “no more excuses” not to win at home and ignite a promotion push.

Unable to reseed during last spring’s lockdown, the Exiles have suffered from sharing Rodney Parade, as rugby matches took their toll. The South Wales side had one of the division’s strongest home records as they shot to the top of in the autumn. When games have been given the go-ahead, Newport’s home form in 2021 has reaped two wins, two defeats and two draws, three goals for and four against. Opta point out they have failed to score in the last two. A third blank make this there worst scoring run since 1980.

It has certainly been heavy going, but the news of fresher turf for this game seems to have inspired Joss Ladabie and Padraid Amond to help find the team’s best form for a win at Colchester on Saturday. A second win in six matches was just a third in 16.

The trouble with the no more slips line is that Newport host Bradford, who are used to playing in a large, impressive stadium – as Cardiff will be – and are one of the form teams in the division. A draw with fellow in-form side Bolton halted a run of five straight wins. Two of those were away, but more pertinently the Bantams have netted twice (or more) in each of their past four away games.

The six different scorers in those matches included Charles Vernan and Ollie Crankshaw (who has proved hugely influential) on their debuts and fellow January signings Andy Cook and Danny Rowe. Joint boss Mark Trueman was delighted with the character they showed in coming back with a late goal against Bolton, who themselves looked like pinching the points with a goal on 83 minutes.

I’m expecting the visitors to further close the four-point gap to the play-off places, by winning three away games in a row for the first time since October 2017.

Mark Bonner said recently he wasn’t “stressed” by Cambridge’s poor run of scoring at home. They have not scored in three at the Abbey before a late, late 1-0 win over Walsall. He was confident of their scoring record, he said. Away goals had contributed to that confidence. They found a late goal at Port Vale to win after defeating Mansfield 3-0 and Barrow 2-0 before that.

The manager says he is “really proud” to have created an identity at the U’s, something perhaps which led Joe Ironside to reveal that the squad had been quietly confident of a promotion push all season.

Striker Paul Mullin, League Two top scorer with 23, was just relieved to score after claiming that he hadn’t had a shot for four matches! That is a poor indictment on his colleagues, for not creating him chances. Shots on target for either side have been at a premium, it seems, in the U’s past four games, which have all ended 1-0, Cambridge winning two.

Four clean sheets in six games gives them a platform to contain Bolton, who won six games in a row before Saturday’s draw with Bradford. With five clean sheets in seven, only in that 1-1 draw and a 3-2 win at Mansfield have both sides scored in a Trotters match. Only against the Stags were there over 2.5 goals in the game.

Boss Ian Evatt will be delighted with the defensive improvements and please that his side don’t just rely on Eion Doyle for goals (13). Nathan Delfouneso notched his sixth of the season against Bradford, while Shaun Miller has scored his two goals this season in the past five games. Having made all 10 appearances this campaign off the bench, he would dearly love a start, but he is relishing the super sub tag, whether it is scoring or supplying.

I expect a draw, but this could be one for in-play as both sides have a habit of scoring in the last 10 minutes of matches. They drew 1-1 in October, with Opta adding that four of their last five encounters have finished level.