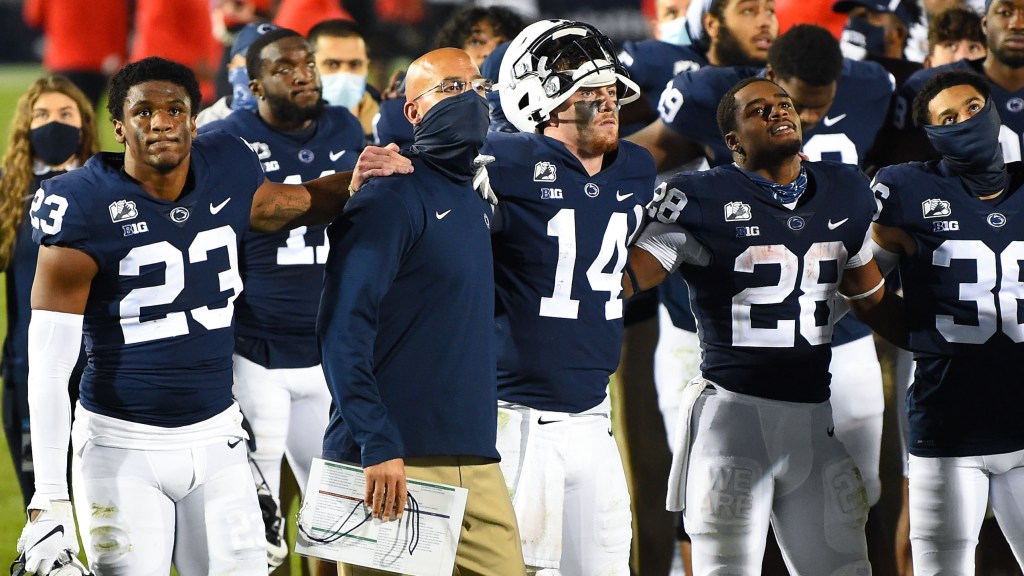 Bet $1 on ANY Big Ten team’s money line, WIN $100 (in free bets) if ANY BIG TEN team scores a touchdown this week!

Place your legal, online sports bets in CO, IN, NJ, TN and WV at BetMGM, The King of Sportsbooks. New customer offer, terms and conditions apply. Bet now at BetMGM!

PENN STATE (-152) has a higher net points per play and net third-down conversion percentage than Nebraska (+125). That’s my jumping off point for this handicap but there’s more.

ESPN’s college football guru, Bill Connelly, hasn’t sold any stock on Penn State’s football team. He has an 0-2 Penn State team eighth in his SP+ rankings compared to Nebraska’s 39th ranking after Week 9. We are getting a good number on the Nittany Lions because they’ve been blown out and are underperforming expectations.

PENN STATE (-152) is the right side, though, the money line is expensive so I’d entertain throwing this in a parlay.

Against the spread (ATS)

One of Penn State’s -3.5 (-106) major struggles has been its rushing attack, which has fallen off a cliff since last season. It is down 1.5 yards per rush year over year and its net rushing yards per attempt has gone from plus-2.3 yards per rush in 2019 to minus-.1 yard per rush in 2020.

A big reason for that is due to the medical opt-out by last year’s leading rusher, RB Journey Brown. He announced earlier this week that he’d be retiring from football because of a heart condition. As much of a bummer as that is, it could serve as a bit of a rallying cry for Penn State this Saturday. The Nittany Lions should have more success on the ground against a Nebraska team below-average in most defensive rushing categories.

These offenses have been terrible through their first few games. Penn State ranks 82nd in points per game and 98th in points per play vs. a Nebraska side that’s 116th in PPG and 117th in points per play. I am going to “LEAN” UNDER 56.5 (-110) because you could highlight both team’s weak defenses at this point as well.

Want action on this one? Sign up and bet at BetMGM. If you’re looking for more sports betting picks and tips, visit SportsbookWire.com. Please gamble responsibly.

Gannett may earn revenue from audience referrals to betting services. Newsrooms are independent of this relationship and there is no influence on news coverage.