The Sunday Million turns 15-years-old this month and, to celebrate, PokerStars is upping the guarantee to $12.5 million. 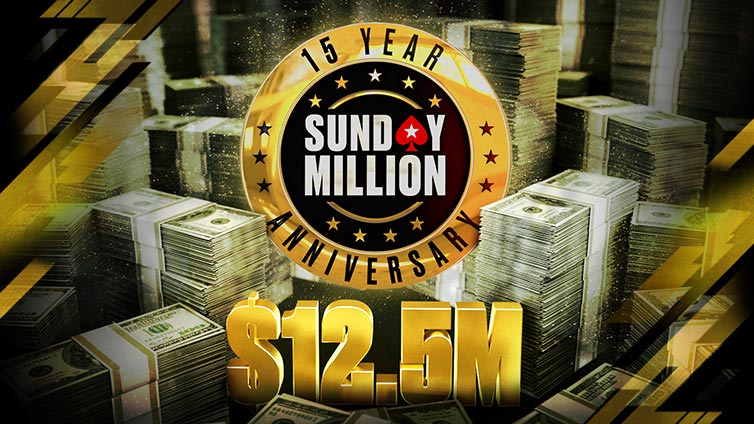 PokerStars is guaranteeing $12.5 million for its 15th anniversary Sunday Million, but those in charge will be expecting more. (Image: PokerStars)

That’s the same guarantee as last year’s anniversary event, which became the biggest Sunday Million ever.

On that occasion, qualifier AAAArthur beat more than 90,000 entrants to turn an $11 satellite ticket into $1,192,802. Buoyed by that success, PokerStars won’t be changing anything this time around.

The special Sunday Million will take place over the course of three days between March 21 and March 23. The buy-in is set at $215 and, regardless of what the final prize pool is, two players will win at least $1 million each.

Satellites start at $2.20 and there are 192 qualifiers available every day. At the time of publication, more than 6,300 players had registered for the MTT.

PokerStars’ tournament team wants to surpass last year’s $18,602,300 prize pool; a total that was more than $6 million more than the 2019 anniversary Sunday Million generated, and the largest Sunday Million prize pool in history.

Sunday Million anniversary prize pools over the past five years

2020’s unprecedented spike was due, in part, to COVID-19 restrictions. At the time, almost every country in the world had imposed some sort of lockdown in response to the pandemic.

The need for in-home entertainment caused online poker activity to surge. That, in turn, was a boon for the Sunday Million.

COVID-19 restrictions not as significant in 2021

The weekly major had lost some of its luster before COVID-19 hit. It was still a staple event for MTT regulars, but due to increased competition from Partypoker and GGPoker, it wasn’t the draw it used to be.

The 14th anniversary Sunday Million changed that. 93,016 entries made it the largest MTT of its kind and one of PokerStars’ biggest ever tournaments.

That level of interest carried over to subsequent Sunday Millions, with interest increasing by as much as 45%.

A year later and the impact of COVID-19 is still being felt across much of Europe. Although live poker events are returning, restrictions are still part of everyday life. The UK, for example, is still in a state of lockdown.

Other countries, however, aren’t as stringent as the UK and no longer have any stay-at-home orders in place. That could affect the number of entrants in the 15th anniversary Sunday Million.

But even if this year’s $12.5 million guarantee isn’t broken, it will still go down as the second-richest Sunday Million in the past six years.