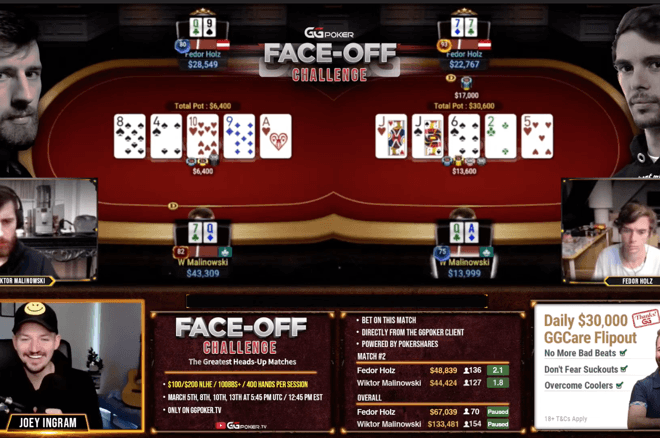 The GGPoker Face-Off Challenge is on, and two sessions in, Fedor Holz has given his doubters some pause, at the very least.

The top tournament pro has the early edge against nosebleed cash game veteran Wiktor Malinowski. Though it’s still in very small sample territory with about 900 hands played, Holz has gone up more than $50,000 in their $100/$200 match after the first two sessions.

After the first session, which lasted around five hours, Malinowski expressed an interest in playing more tables. They did just that in the second session despite both firing off in some high-stakes tournaments, but and Holz booked another small win

Check out the GGPoker Hub on PokerNews!

for $500, Malinowski three-bet the

flop. Malinowski slowed down with a check and just called Holz’s small sizing of $1,200. The turn brought a

and Malinowski check-called a bigger bet of half-pot, $3,300. On the

river, Malinowski checked with about $15.8K, just over the pot left. Holz went deep into the tank before jamming, and his chips hit the pot about as quickly as Malinowski’s virtual cards went into the muck.

First big round to Holz in one sense, but in another, a successful escape by Malinowski.

Another nasty spot came up after as Malinowski’s poor luck with queens continued. This time, he three-bet to $2,000 again with

and was met with a raise to $3,220. Malinowski wasn’t giving up yet and called, bringing the

. He opted to lead out really small with $1,360. Holz called and the river was the

. Malinowski checked and Holz shipped it in for about a pot-sized bet of $16K effective and Malinowski snap-folded again.

Perhaps Malinowski felt he was getting run over early, but he must have figured the time was right for a move of his own around the 100-hand mark. He’d defended the big blind with

and Holz c-bet with

after flopping huge again on

. This time, Malinowski fired in a raise to $1,360 from the $300 bet, and Holz called. Malinowski turned some equity with the

and overbet for $5,020. Holz called again, bringing the

“What did you roll?” Holz said with a laugh after the showdown, referencing the random number generator many regulars use to help their decision-making.

“I rolled 98,” Malinowski said with a chuckle.

. Holz slowed down and check-called a small sizing with

only to nail the

that also improved Malinowski. Holz check-raised all in and had a slight lead against the massive draw, and the

Finally, Malinowski got some momentum when he caught Holz bluffing. Holz peeled versus a check-raise with

. He then bet the

big when checked to and then potted the

river for $9,600. Malinowski had a good bluff catcher with

and looked him up to rake in the pot.

Holz peaked close to a $100K winner when he sucked out with a rivered flush versus Malinowski’s trip kings, though the latter saved himself some dough with a river check back.

Holz then barreled down after opening

defend. All looked well for Holz as he bet $700 on

. Unfortunately for him, the

, with Malinowski calling again. On the

, Holz tanked awhile then bet $11,256. Malinowski didn’t snap but did eventually find the call button to drag the $38K pot.

. There was about $10K in the pot already and Malinowski continued for $2,240 in position on

Malinowski showed off his heroing skills with

after calling a three-bet and seeing

. He called a small bet on the flop, the

turn checked through, and Holz bet the

for an airball. Malinowski snapped with the ace-high.

arrived. Malinowski bet small again, this time $4,216. Holz again called, leaving about $8K back with $23K in the middle. Malinowski stuck the rest in and Holz tanked but found the call to chop.

Then, Holz three-bet with

and both players checked the

. Holz bet big on the

river with $5,020. He had about $15K back and Malinowski offered to play for that as well. Holz tanked a bit then let it go.

Holz was stuck a bit but battled back into a small lead when a wild hand went down. He called a three-bet to $2,000 with

and was up against

flop improved neither player and Holz called a bet of $1,200. Malinowski checked the

and Holz bet $3,600, just over half the pot. Malinowski peeled, bringing the

on the river. Malinowski had a hair over the $13,600 left in the pot and he checked. Holz shoved and Malinowski tank-called off but the hero call failed.

A disaster scenario arose for Holz when they were about 150 blinds deep. Holz three-bet, Malinowski four-bet to $5,200 and Holz made it $10,500 with

and flopped a flush on

, and Malinowski just called again. On the

“It’s not exciting,” Holz said with a sigh as he went deep in the tank.

The players called it a session as they surpassed 400 hands again, and the ticker on the bottom had them close to even but the GG team tweeted that Holz booked another win of about $15K.