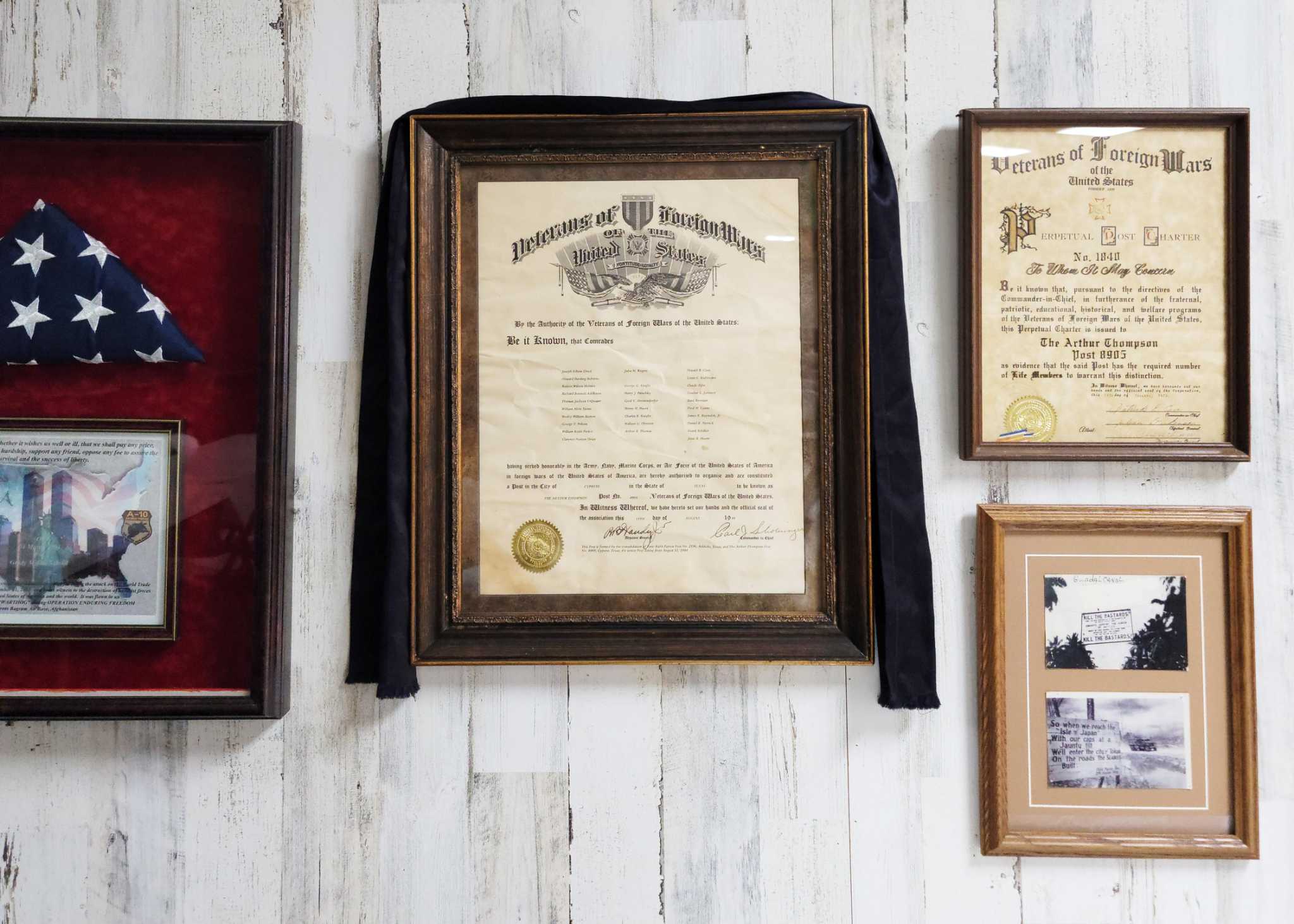 At the last board meeting, VFW Post 8905 Commander Josh Wilcox walked slowly toward the Wall of Honor as everyone stood in silence. He carefully took the black drape and delicately hung it over the VFW charter. The ceremony is akin to lowering the flag to half-staff in memory of a fallen comrade. The black draping remains on the charter until the next board meeting, usually 30 days later, when it’s scheduled to be removed. In February, it was draped to honor three members of the post who passed away.

At the March meeting on Wednesday, the drape didn’t come off. It remains for yet another death in the membership.

The ceremony seems all too familiar particularly over the last 12 months when COVID-19 took a nasty grip on the nation and right here at home in Cypress on 21902 Old Hempstead Highway near Gentry Road in Hemwick Place. But surprisingly, the deaths at the post were not from COVID.

“So far, we have only had one member of our auxiliary die from the coronavirus and that happened yesterday (Monday),” Wilcox said. He feels lucky they have been able to protect their membership from the ravages of the virus with their protocols, but not so lucky in the natural flow of life as his membership continues to age.

This year has been particularly hard for the 365 members who remain on the roster as they battled the virus, loneliness, a historic freeze, and the fear of leaving their homes just to purchase groceries and make doctor visits. The year, he said, has been draining.

“With the combination of COVID and our aging membership, it seems like we are in a constant state of mourning,” a sobering thought, Wilcox said.

He is on a mission to change that trajectory while they continue to fight through the pandemic and change an age-old perception of VFW halls.

Wilcox was medically discharged as a sergeant in the U.S. Army and since his ascension to commander of the post in October 2018, he continues to lead his troops at the post through the worst of times.

“We have been completely shut down this entire time since last March 17,” he said.

“Anything we did had to be off this campus because we hold a (Texas Alcohol and Beverage Commission) liquor license,” he said. Those activities were minimal. The order to shut down that came from local and state officials has resulted in the permanent closure of two area posts in their district that could not financially survive.

“They are merging with posts that managed to survive so they’ll still have a home,” he said disappointed.

Despite being closed, the bills continued for power, water, insurance and several other necessities.

“It was brutal. We’ve been working with our vendors to find ways to meet our bills and obligations,” he said.

“Other things, like the power bill, is non-negotiable. Luckily, we had enough in our savings to float us through this year,” he said. He admitted there were months that were tight, but donations and an estate that was willed to them has helped them keep the facility available for use.

“We’ve received other donations including our ceremonial honor guard that does detail at the Houston National Veterans Cemetery that has brought us dollars to help pay the bills,” he said.

He said their monthly electric bill is close to $1,500. It is a large facility, but even with it closed, the several-thousand-foot facility drinks the power. He knows there are some issues that can be addressed with a qualified electrician. The main hall alone is 7,000 square feet with a fire marshal capacity of 400. The original building is another 4,000 square feet and the canteen about 2,500 square feet.

“We are looking for an electrician who can help us with donated hours to help rewire a lot of the building in hopes it will save us considerably on the electric,” he said.

While the venue was shut down for post activities, Wilcox said he found ways to use it as a rental venue.

“We have partnered with Triple Crown Bingo with an 18-month lease for them to come and host midnight bingo twice a week, and two daytime bingo events each week. That saved us,” he said.

With the financial setting more secure, the charitable bingo proceeds have allowed the commander, quartermaster, and their new leadership team to return to making physical improvements to the facility.

The contract began in November and with it, Wilcox and the membership have done numerous upgrades to the facility including several new 75-inch flat panel screens, a rewired and improved sound system, upgraded Wi-Fi, a better ATM machine, and drink coolers. All the improvements contribute to the quality of the rental space for both members and guests from the bingo tournaments.

The IT upgrades were donated by Wilcox’s company.

They also had numerous leaks and Telge Roofing in Cypress has pledged to donate a new roof to the facility.

“That’s about $10,000 worth of materials and another $5,000 in labor from those professionals,” Wilcox said, grateful for the in-kind donation.

Once the roof work is complete, Wilcox said they would be able to finish up their inside remodel of the large facility.

Another revenue source is a small campground in the back of their facility.

“We are capable of supporting 12 different campsites with water and electric. We’ll be leasing those spaces to food trucks in the area so it can be a food park during the week,” he said.

Wilcox is not only out to change the appearance, but the reputation of the VFW Hall.

“For years, the VFW Hall has been known as a dingy, smokey bar,” he said.

There is now a no-smoking policy in the main hall and smoking is only allowed in the canteen area where the actual bar is located.

“We want to be known as a family-friendly veteran’s organization. We want it to be a special place for our veterans,” he said.

When the hall is open, they host a wrestling night, a very popular steak night, a regular fish fry, and many other activities.

Wilcox has also given over the polity to the membership.

“In the past, one person ran the whole program. I want input from our membership, so I let them drive the way the post is being ran,” he said.

His aging membership means they lose a Vietnam-era hero more often than they’d like.

To fill the ranks, he’s reaching out to younger, Desert Storm warriors to come out and participate with more family-friendly programs.

“Carl’s Barbecue will cater food for our meetings, and we’ll get back involved in the community with scholarships for students,” he said.

Wilcox said it will be a home for those who are returning from duty, whether stateside or in a combat zone, and a place to find friends of multiple generations to share their stories and bring their families for fun and fellowship.

“They think the same way they do because they’ve been through it all. Those shared experiences will be helpful to all,” he said.