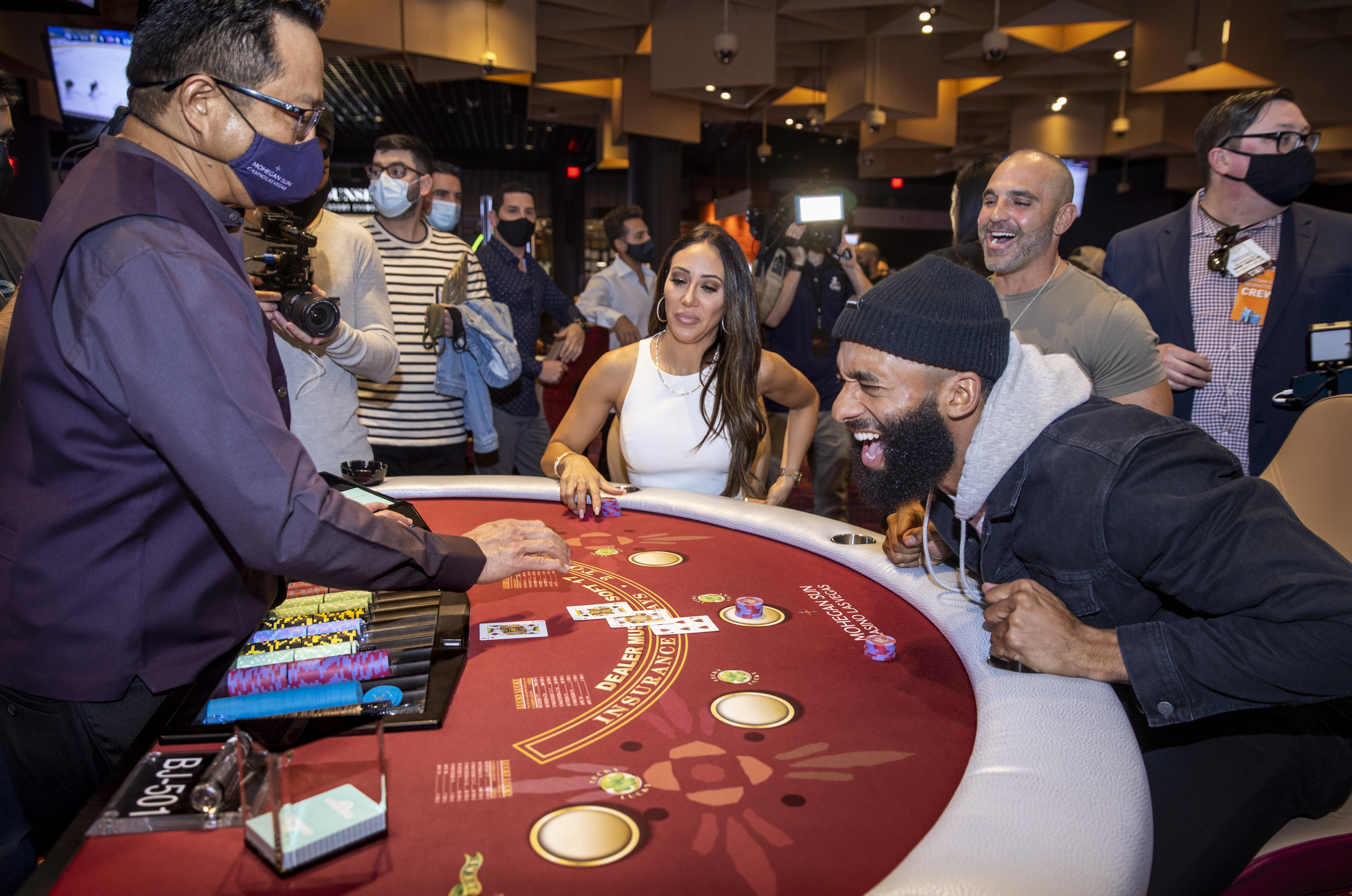 It had been 415 days ago when the Hard Rock Hotel closed.

On Thursday night, the doors reopened with several flourishes, including a new owner and casino operator and a fresh look.

“May we live in a world and may Las Vegas live in a world where we never have to close doors again to our resorts,” said Richard “Boz” Bosworth, president and CEO of JC Hospitality, owner of Virgin Hotels Las Vegas, after he removed a gold chain that secured the front door.

“How proud we are to be opening tonight, not with fireworks, not with lasers shooting up to the sky, but as Las Vegas begins reopening and recovery,” he said. “We welcome the community back to 4455 Paradise and 1,600 hospitality professionals that have been out of work for a year.”

The public got its first glimpse of the property after the 40-minute opening ceremony in the hotel’s east porte-cochere that included appearances by a quartet of bagpipe players, a contingent from the Vegas Golden Knights Drumbot drumline and a red double-decker bus that had been cruising the resort corridor and was a part of Virgin’s pre-opening advertising campaign.

One former Hard Rock employee was bouncing from person to person on the casino floor, making conversation and chatting up friends old and new.

“When I walked in here, the first thing I said was, ‘I’m coming back,’” Denise Bassard proclaimed to a slot machine player with his feet up.

And she plans on following through.

The Las Vegas resident was a casino porter at Hard Rock before it closed last February, she said. Bassard said the previous hotel was wonderful. Walking around the Virgin hotel for the first time, seeing many of her former co-workers, has her excited and itching to return as an employee.

“That’s why I’m walking around like I’m in a candy store,” Bassard said.

Her familiarity with the people would come in handy.

“In fact, I got lost. I had to ask a security guard I know where’s the bathroom,” she said with a laugh.

Anticipation of the big day prevented a good night’s sleep for a few of Virgin’s workers.

A card dealer answered a guest’s questions wearing a smile that even a mask couldn’t hide.

“I’m real excited,” Theresa Caple said about 15 minutes before the casino’s official opening. “I was so excited today to come here, I couldn’t even sleep.”

She has a day job in the medical field and has dealt cards at other casinos. Caple was there Thursday as a temporary worker through the Casino Job Center, and she hopes she gets hired full time.

The Virgin hotel was too exciting an opportunity to pass up, she said. She’s a big fan of the Virgin brand and its founder, Richard Branson.

It had been a while since she last worked at a casino, so she brushed up her skills at the Crescent School of Gaming and Bartending.

“I had to,” she said. “I was drawing people’s blood, I wasn’t dealing cards.”

Nearby, Marci Soulia, a 49-year-old cocktail waitress, carried a tray of mini water bottles across the casino floor minutes before it opened to the public.

She, too, was happy to be there.

Mike Roark and Jessica Pacheco wondered whether the nearby line of about 100 people was for people looking to sign up for Mohegan’s Momentum rewards program.

The Las Vegas locals are staying at the property for the weekend. Pacheco, 44, said the engaged couple occasionally visited the Hard Rock but figured they should check out the opening. They were impressed with what they saw.

“Opening night. Why not?” quipped Roark, 67. “See what they bring, because they’re gonna bring all their best tonight.”

“And I think also after COVID, and being locked down so long, we’re all just ready to run out of the house,” Pacheco added.

“If it wasn’t for the masks, you would think this was a normal casino opening,” Roark said with a chuckle.

People of all ages packed the casino floor and event lawn on opening night.

Plexiglass partitions divided the seats at slot and gaming machines and the spots at the gaming tables.

It appeared every casino employee wore a mask Thursday; nearly all of the guests wore one, too. Most of those who didn’t were sitting at a restaurant table or had a drink in their hand.

One maskless woman waiting in a line near the Night + Market restaurant was overheard saying, “If the mask police come by, they’re gonna get me.” Every other guest in line appeared to have one.

Costumed and painted performers strode the casino floor on massive stilts, posed as living statues at a heart sculpture in the lobby and danced near the restaurants.

A pair of women in reflective, form-fitting costumes waltzed past a Dunkin’ near the Casa Calavera restaurant. A man in a blue suit jacket remarked to another man he was walking with: “Hey, I’m glad I didn’t wear my mirror jacket.”

Hotel rooms were already sold out for opening night. Executives from Virgin, JC Hospitality LLC and the Mohegan Sun Indian Tribe exchanged gifts as part of the new partnership for the resort.

Casino workers have embraced what the Mohegan Sun Tribe calls “the Spirit of Aquai,” a centuries-old guiding philosophy that encourages a warm and welcoming atmosphere, passionate and dedicated employees based on mutual respect, providing outstanding service and building productive long-term relationships.

Virgin opened its doors with a complement of 12 food and drinking establishments and The Manor, a collection of convention halls and an outdoor lawn that can accommodate entertainment and corporate meetings and trade shows. The 5-acre pool area is still under construction but is scheduled to open by summer.

Chilly breezes swirled around the opening ceremony, and jets flying in to McCarran International Airport disrupted a few speeches. That wasn’t lost on Danny Hughes, president of Hilton Americas.

“I love seeing the planes fly by because that means people are traveling again,” he said during his presentation.

While Virgin’s founder, Branson, wasn’t a part of the festivities, James Bermingham, CEO of Virgin Hotels, was, and he said Branson “would be proud to paint Las Vegas Virgin red.”

There are plenty of British and desert Southwest vibes associated with property. The 1,500 hotel rooms and suites are referred to as “chambers,” and the sportsbook will be operated by Betfred, a United Kingdom company, once it becomes licensed by the state.

Pastel shades of pink and purple with surprising bursts of greenery from cactuses and shrubs surround the property.

“A lot of the inspiration really came early on from the travel that you would see as you came to Las Vegas through the desert,” said Gary Scott, chief operating officer for JC Hospitality. “You’re going to see a lot of greenery … but it’s light, it’s fresh and it’s airy. And really, it embodies the spirit you might have found at Palm Springs years ago.”

Most of Virgin’s 1,600 employees are former Hard Rock workers, and in the casino, half the 600 slot machines on the casino floor are holdovers from the Hard Rock days with the other half are new additions to the property.

The off-Strip resort will be a part of Curio Collection by Hilton and it will intermix a passion for food and beverage with music and culture with three hotel towers, the 60,000-square-foot casino, a five-acre desert pool oasis including a multi-functional event lawn; a live music and entertainment theater with 4,500 capacity and 24 Oxford, a showroom accommodating 650 guests.

Thursday’s opening will include live music on The Lawn, a gathering space that doubles as a meetings and convention area, but is not expected to include a VIP party usually associated with resort openings. Property officials said a VIP opening would likely occur once more people are vaccinated and coronavirus cases fall.