A head to head matchup between the readers and myself

Who is the better bettor?

Now that you guys have chosen which bet you’re going to make, let’s take a look at the bets involved in this weeks challenge.

Here’s a reminder of how this is going to work for the rest of the season. The odds post will come out each week and I’ll make what I believe to be the best bets for each game. Four of the bets will be picked and we’ll tweet out a poll for you guys to choose which bet you believe is most likely to win. I’ll pick one of the other bets and each week we’ll recap the head to head as well as how each team did at the sportsbook. In the event of a cancellation of a game that was bet on, the next highest chosen bet will be made in its place. 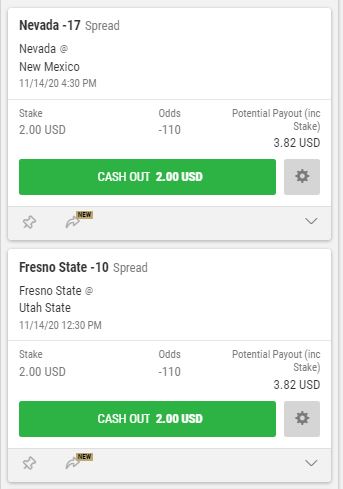 Nevada seems to be top of the class in the Mountain West so far this season. The Wolf Pack air raid offense is racking up the yards and the points with no end in site. The defense answered some questions last week against Utah State. New Mexico has lost both games, but looks like an improved squad from previous years.

Nevada’s defense is allowing just over 300 yards and 20 points a game. New Mexico did better against Hawaii last week, but Hawaii doesn’t have the best defense so far this season. Also Tevaka Tuioti is out with a concussion this week and Trae Hall didn’t exactly impress. Expect an easy cover for Nevada.

Gary Andersen is out at Utah State. How much improvement this brings to the Aggies remains to be seen. Utah State is averaging under 10 points a game and just over 200 yards of offense per game. Fresno State looks to gain more confidence against a defense that gives up 38 points and 520 yards a game.

The Aggies might get a boost from interim head coach Frank Maile and that’s why the line is only at 10 points. However, until the Aggies show me something I’m going to continue to bet against them. Take Fresno State to cover here.

Looking for some action on these games or others? Place your legal sports wagers online at BetMGM in CO, IN, NJ and WV. Bet now!

We may earn revenue from audience referrals to betting services. Newsrooms are independent of this relationship and there is no influence on news coverage.